Frustrated with gun control battles at the federal level, two Connecticut women have set out on a different path — organizing a yearlong active dialogue about gun violence with art playing a big role. And Westport is central to their efforts. 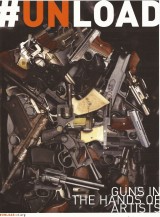 Part of the marketing materials developed for the project. (CLICK TO ENLARGE) Contributed graphic

The project, which they call “Unload-CT: Art Triggers a Conversation,” includes a gun buyback in Hartford with some weapons given to local artists to turn into art and later exhibited at New Haven’s Artspace.

There also will be a guns-into-art exhibit in Fairfield, which is currently traveling nationally, panel discussions (the first Jan. 19 at Grace Farms in New Canaan), a film series in Hartford, multiple events at arts institutions statewide, and a partnership with a Westport Country Playhouse production.

“We want to engage people, not just have discussions; we want change,” said Helen Klisser During, artistic director emeritus of the Westport Arts Center.

Added Mary Himes, wife of U.S. Rep. Jim, Himes (D-4): “We’re frustrated with the lack of action on the federal level so we thought of taking a different approach.”  Both emphasized the effort is nonpartisan.

The women are keen to engage in debate with gun owners and advocates.

“We’re looking to find where the other side is coming from so we can find solutions,” Mary Himes said. “It’s about having robust conversations. We need to change the culture of how people think about guns.” 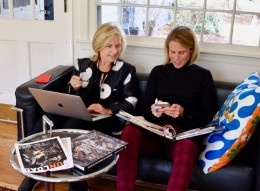 The idea of turning gun buybacks into works of art had its origins in 1996 in New Orleans. It was revived there in a 2013 exhibition and again in 2015 at the Aspen Ideas Festival as well as other art venues.

Called “Guns in the Hands of Artists,” the exhibit will come to Fairfield University May 31 to Oct. 15 at the Fairfield University Art Museum’s Thomas J. Walsh Art Gallery at the Quick Center. Westporter Peter Van Heerden, executive director of the Quick Center and former executive director of the Westport Arts Center, was eager to host the exhibition.

In early December, the women are holding a “Save a Life, Buy a Gun” fundraiser in Westport at a private home to help fund the already scheduled Hartford gun buyback program later in December. They hope to raise at least $20,000.

Members of the Westport Artists Collective will organize their own exhibition focusing on guns in June, which is Gun Violence Awareness Month.

The Playhouse production of “Thousand Pines,” a story about families affected by gun violence, will debut on Oct. 30.

“We hope to use the whole project as a model that we can export to other states,” said Himes.

As word of the effort has spread, both women say those who want to support it have overwhelmed them. They expect the grass roots endeavor will snowball involving many more arts institutions and nonprofits across the state that also seek an open, nonhostile platform for debate.

“We’re amazed at the number of people who want to participate,” said Klisser During, a member of the Connecticut Arts Council (and also a WestportNow contributing photographer.)

The women are seeking funding for the events, which will include educational workshops next summer in Bridgeport led by Jahmane West, a founding member of the Westport Artists Collective.

For more information, contact .(JavaScript must be enabled to view this email address).

“It will take a very big village,” added Klisser During.